Tara Boumdeay (voiced by Kath Soucie) - One of Dr. Gangreen 's failed experiments. She abandoned his evil plans with F.T. and escaped to the Finletter's where she is Chad's best friend and waitress at Wilbur Finletter's Pizza Palace. Tara is a pretty teenage girl who has always liked Chad since he is always brave. She mostly wears a short red shirt, blue shorts, tan cowgirl boots and earrings. Whenever salt is poured on her, Tara turns into a tomato. When pepper is poured on her, she sneezes and returns to her human form (usually given a tissue and blowing her nose afterward). She is also shown to have telepathic and telekinetic tomato powers. In the movie, she was actually Chad's girlfriend, but while she shows a definite interest in him, in the cartoon they never do more than occasionally hug. 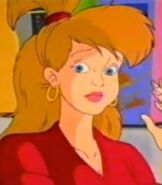 Add a photo to this gallery
Retrieved from "https://155movie.fandom.com/wiki/Tara_Boumdeay?oldid=257"
Community content is available under CC-BY-SA unless otherwise noted.